Tinder - we all know that dating app where you can just reject or accept someone by swiping right or left. BAM! The whole card swiping idea is now used in tons of apps. It’s a way to show data if you have grown tired of using table views and collection views. There are tons of tutorial on this and this project took me good bit of time.

You can check out the full project on my Github. 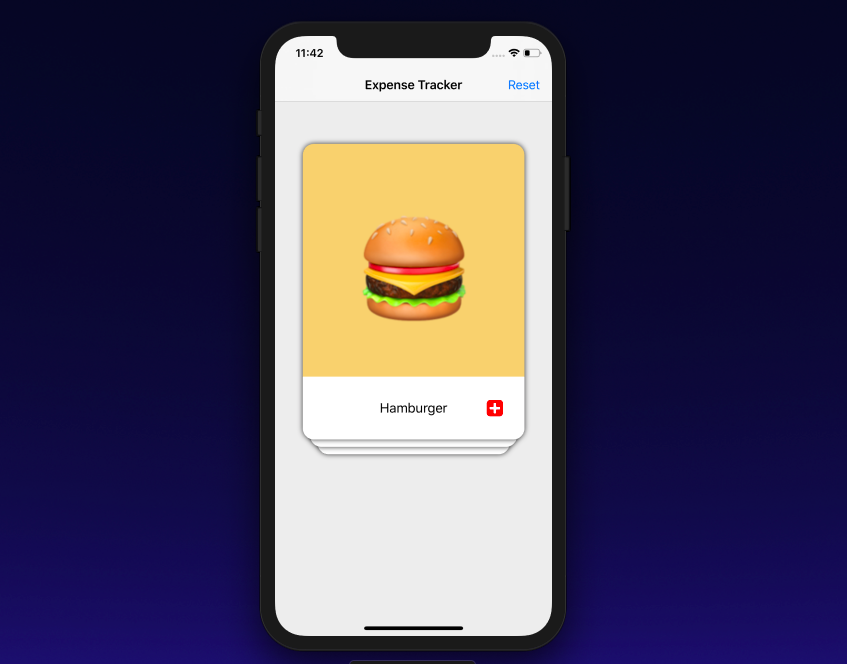 First of all, I would like to give credit to Phill Farrugia’s medium post on this and then Big Mountain Studio’s YouTube series on a similar topic. So how do we go about making this interface. I got quite a lot of help from Phill’s medium post on this front. Basically the idea is to create UIViews and insert them as subviews in a container view. Then using the index we will give each UIView some horizontal and vertical inset and tweak its width a bit. Then when we swipe away one card, all the views frames will be rearranged according to the new index value.

We will start by creating a container view in a simple ViewController.

As you can see I have created a custom class called SwipeContainerView and just configuring the stackViewContainer using the auto layout constraints. Nothing too bad. The SwipeContainerView will be 300 x 400 in size and it will be centered in X axis and just 60 pixels above the middle of Y axis.

Now that we have set up the stackContainer, we will head over to the StackContainerView subclass and load all the card views in it. Before doing that we will create a protocol that will have three methods:

Think of this protocol as a TableViewDataSource. Conforming our ViewController class to this protocol will allow us to transfer information of our data to the SwipeCardContainer class. The three methods we have in this are:

Conform the view controller to this protocol:

In the first method, return the number of items in the data array. In the second method, create a new instance of SwipeCardView() and send the array data for that index and then return the SwipeCardView instance.

SwipeCardView is a subclass of UIView on which there is a UIImage, UILabel, and a gesture recognizer. More on this later. We will use this protocol to communicate with the container view.

When the above code is triggered, this will trigger a function of reloadData that will then call these datasource functions.

In this reloadData function, we are first getting the number of cards and storing it in numberOfCardsToShow variable. Then we are assigning that to another variable called remainingCards. In the for loop, we are creating a card which is instance of SwipeCardView using the index value.

We essentially want less than 3 cards to appear at any one time. Therefore we are using min function. CardsToBeVisible is a constant at 3. If the numberOfToShow is more than 3 then only three cards will be rendered. We are creating these cards from protocol method of:

The addCardView() function is just used to insert the cards as subviews.

This addCardFrame() logic is taken directly from Phill’s post. Here we are setting frame of the card according to the index of that card. The first card with index 0 will have the frame directly as that of the container view. Then we are changing the origin of the frame and width of the card according to the inset. So essentially we add the card slightly to the right of the card above, decrease it’s width, also make sure to pull the cards downwards to get that feeling of the cards being stacked on top of each other.

Once this is done, what you will see is cards being stacked on top of each other. Pretty good so far!

However now we need to add the swipe gesture to this card view. Let’s now bring our attention to the SwipeCardView class.

The swipeCardView class is just a normal UIView subclass. However, for reasons only known to Apple engineers, it is incredibly difficult to add shadows to a UIView with rounded corner. In order to add shadows to the card views, I am creating two UIViews. One is a shadowView and then on top of that there is a swipeView. The shadowView essentially has the shadow and all. The swipeView has rounded corners. On the swipeView I have added UIImageView, a UILabel to showcase the data and pictures.

The first four lines in the above code:

First we get the view on which the gesture has been swiped. Next we are using the translation method to get how much the user has swiped on the card. The third line is essentially getting the mid point of the parent container. The last line is where we are setting the card.center. As the user swipes on the card, the center of the card increases by translated x value and translated y value. In order to get that snapping behavior we are essentially changing the center point of the card from fixed coordinates. When the gesture translation ends we get it back to the card.center.

If swiped to the right:

If swiped to the left:

If the user ends the gesture mid way between 400 and -65 well then we will reset the center of the card.  We are also calling a delegate method when the swipe ends. More on this later.

For getting that tilt when you swipe on the card; I will be brutally honest. I used bit of geometry and used different values of perpendicular and base and then used tan function to get a rotation angle. Again this was just trial and error. Using the point.x and container’s width as two perimeters seemed to work well. Feel free to experiment with these values.

This function will take in a view on which the swipe took place and we will do some steps on it to remove it from the subviews and then redo all the frames for the cards beneath it. Here is how:

First remove this view from the super view. Once that is done check if there is any remaining card left. If there is, then we will create a new index for a new card to be created. We will create the newIndex by subtracting the total number of cards to show with the remaining cards. Then we will add the card as subview. However, this new card will be the bottom most one so the 2 that we are sending will essentially make sure that the frame we will add is corresponding to the index 2 or the bottom most.

In order to animate the frames of the rest of the cards,  we will use the index of the subviews. To do this we will create a visibleCards array that will have all the subviews of the containerView in it as an array.

So now we will update the frames of the rest of the cardViews.

So that’s basically it. This is a perfect way to present small amount of data.